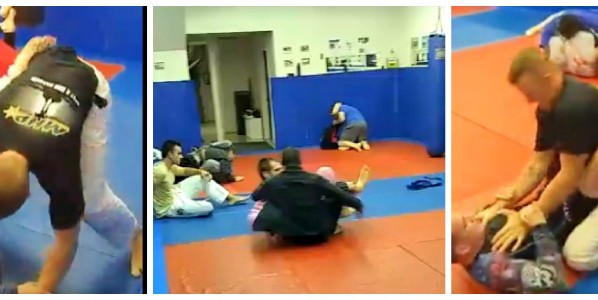 This Friday at our open mat at 6pm will be the 3rd week of Friday Night with Jay Speight, and so far each Friday our numbers are getting bigger and bigger. This I a free event and everyone is invited to come and train with Jay Speight… it is a no-gi training but if you want to bring you Gi that is ok too…this I a event you don’t want to miss… bring a friend….

if you do not know who Jay Speight is, well he has been training in Gracie Brazilian Jiu-Jitsu since he was 6 years old, have competed extensively, has a Undefeated professional record in mixed martial arts….

It was a amazing scene to see Alex fight for the first time here in America.. an immigrate from Ukraine he came to my gym with such desire and drive few coaches have ever seen. I am proud to call this man a member of Team GAMMA. And “ I LOVE YOU AMERICA!!!”

One of the best comeback in mixed martial arts fights I have seen as a coach in all the years I have been coaching MMA. And I have to give props for Dan Miragliotta the referee who was refereeing this fight. He didn’t step in too early he let the fight continue. essentially the other guy Knocked my Chris Burns out at 23 seconds in this video, broke his nose, blood was everywhere, Danny allowed the fight to continue, Chris was able to regained enough to get the armbar that broke the other guy’s arm. I think that Dan Miragliotta stopped the match when he reached in to check the fighter and his arm was limp. I think he thought he was choked out but the arm was dislocated.

If you are in the Eastern North Carolina Area and want to train with the best MMA team in the area. Check us out.