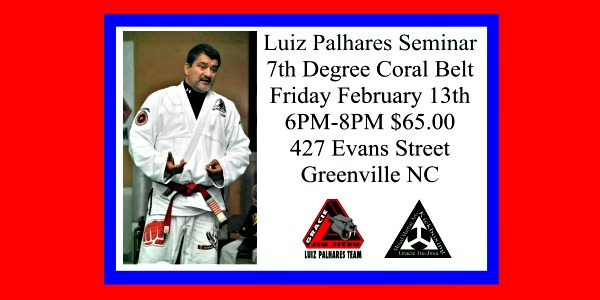 Master Luiz Palhares Seminar will be at the All-American Martial Arts Academy Friday February the 13th to do a seminar for all his students, everyone is invited to attend. Luiz Palhares is a Coral Black Belt in BJJ under Rickson Gracie.

Luiz Palhares is a Brazilian-American martial artist born in Rio De Janeiro, Brazil. He is a 7th degree Coral belt in Brazilian Jiu-Jitsu (BJJ), 3 time winner of the Pan American Champion, and 1998 Brazilian National Champion in BJJ. Taught by the Gracie family, he is known for his own work training military and law-enforcement in BJJ techniques.

Palhares started his training in Rio De Janeiro under Rolls Gracie until Rolls died in 1982 in a hang-gliding accident. Palhares continued training under Rickson Gracie and it was Rickson Gracie together with Helio Gracie who gave Palhares his black belt in 1984.

In 1999 Palhares, then a 6th degree black belt, was brought from Brazil to teach at Rickson’s Academy in L.A. Since 2007, Palhares has operated his own Academy in Jacksonville FL, Jacksonville Gracie Jiu Jitsu, teaches seminars around the globe, and conducts private lessons. Palhares received his 7th degree black belt in 2010 by Grand Master Carlos Robson Gracie, Red Belt 9th Degree (President of the Jiu-Jitsu Federation of Rio de Janeiro).

Why Brazilian Jiu Jitsu Is Great For Children

The Jiu-Jitsu Times | Why Brazilian Jiu Jitsu Is A Great Sport for Unathletic Children. Today I ran across a good article about why Brazilian...read more →

Come out and support our three fighters. Terrance Whitmore. Alex Human, and Tashi James. They will be stepping in cage again tonight at 7PM in...read more →

I am happy to announce that the new parking garage opened today, and it is Free to Park there, after 5pm. You can their website,...read more →